Posted on April 13, 2012 by Rebecca Taylor MEP
On Monday morning, I met with Councillor Christine Bampton-Smith, Councillor John Beacroft-Mitchell and Jade Smith from Mytholmroyd Liberal Democrats to welcome improvements to rail services in the town.

The Calder Valley train line on which Mytholmroyd station sits is one of the lines that will benefit from the "Northern hub rail scheme" announced in the March government budget (see my blog post on the budget), which will upgrade various train lines in the North of England to allow for faster journey times.

I personally use the Calder Valley train line rather often as I have family in Todmorden, which is also on the train line. The Todmorden loop, which links Todmorden and Burnley and was closed by Beeching in the 1960s, will also re-open as part of the Northern hub rail scheme. Throughout my life (I was born in Todmorden in 1975) there has been talk about re-opening it and now finally it will happen, thanks to Liberal Democrats in government. Burnley LibDem MP Gordon Birtwhistle who campaigned hard for the loop to be re-opened, was particularly pleased as it gives people in Burnley a direct rail connection to Manchester for the first time in over 30 years.

LibDem councillors in Mytholmroyd would also like to build a car park on wasteland by the station in order to increase the car parking capacity and make it easier for more people to travel by rail. The roads in the are very congested during peak times, so getting people out of their cars and on to trains is entirely sensible. Unfortunately, local Labour councillors voted against funding for the car park, but my Mytholmroyd colleagues will continue to campaign for the car park to be built.

I also admired the recently upgraded Mytholmroyd station with its new electronic display boards and ticket machines. As the station has been "adopted" by a group of local volunteers, it also benefits from lovely floral displays tended by the volunteers themselves. A good example of community action! 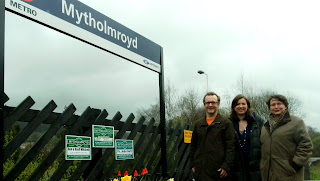