Liberal Democrats stand up for British trade & jobs; UKIP and Eurosceptic Tories pretend you can have your cake and eat it

Following a number of Twitter exchanges about trade with Eurosceptics (mostly UKIP supporters), I decided I needed a bit more than 140 characters to properly address this crucial topic.

Posted in Blog | Comments Off on Liberal Democrats stand up for British trade & jobs; UKIP and Eurosceptic Tories pretend you can have your cake and eat it

Outdated, outmoded and increasingly inaccurate: is it time follow our European neighbours and say goodbye to "Miss"?

It has long been unfair that women can be identified by their marital status through the use of  “Miss” or “Mrs” whereas men cannot via “Mr”. “Ms” was introduced as an alternative for both married and unmarried women, although is not universally used or liked.

Posted in Blog | Comments Off on Outdated, outmoded and increasingly inaccurate: is it time follow our European neighbours and say goodbye to "Miss"?

Use of electronic cigarettes: blanket bans are not appropriate!

I am hearing about blanket bans on people using e-cigarettes on public transport and in some public places like bars and pubs e.g. Wetherspoons, etc. I have even seen a notice banning the use of e-cigs in a comedy club where you can eat and drink whil…

Posted in Blog | Comments Off on Use of electronic cigarettes: blanket bans are not appropriate!

Negotiations between the European Parliament and national governments (“trialogues”) on the tobacco products directive have begun and several meetings have already taken place. There is a strong desire to try and reach agreement on the tobacco directive during the Lithuanian Presidency, which runs until the end of the year.

National governments are represented by the Lithuanian Presidency and the EP negotiating team is led by the rapporteur Labour MEP Linda McAvan, along with the shadow rapporteurs from the other political groups. The Liberal group is represented by Belgian Liberal MEP Frédérique Ries, co-author along with myself and Chris Davies of amendment 170 on e-cigarettes.
After the first trialogue meeting which addressed the issue of e-cigarettes, Frédérique tweeted the following:
“#trilogue #ecig: ça va mal, la Présidence lituanienne ne veut rien entendre, RIEN. Pas un geste, aucune volonté! Je bataille contre un mur”
(translation: “It’s going badly for e-cigs in trialogue, the Lithuanian Presidency doesn’t want to listen at all. Not a gesture, no willingness whatsoever! I am fighting against a brick wall”)
However, along with Frédérique, the centre right (EPP) and Conservative (ECR) shadow rapporteurs, German MEP Karl Heinz Florenz and UK Tory MEP Martin Callanan made it clear that e-cigarettes were a red line for their respective groups. If those three groups (ALDE, EPP and ECR) vote along the same lines, they form a majority in the European Parliament and once an agreement is reached on the tobacco directive, it will have to be approved by the Parliament (a simple yes/no vote).
An agreement on the tobacco directive which is not fully supported by three political groups which constitute a majority of MEPs is unwise, and therein lies the hope for sensible regulation of e-cigarettes.
Since the July 2013 position of national governments on the tobacco directive, which included an agreement to support medicines regulation for e-cigarettes, the ground has shifted significantly. Not only did the European Parliament clearly vote against medicines regulation, but action at national level has drawn this matter to public and political attention. In addition, there have apparently been complaints to the Lithuanians that they are going too quickly on e-cigs without allowing national governments the chance to consider other options.
The key country right now is France, which is believed to no longer be supportive of the medicines route for e-cigarettes (and was reluctantly supportive previously), although no official change of position has been announced. In France, 100 leading doctors recently sent a letter to the French government asking them to act on this issue and push for sensible regulation. It is thought that if France changes its position on e-cigs, this may lead other countries to do the same.
The irony of a Socialist government in France opposing medicines regulation of e-cigs, contrary to the position of the Socialist group in the European Parliament, while a Conservative/Lib Dem coalition government in the UK supports medicines regulation against its own MEPs, is not lost on me!
What is needed right now from a UK perspective is to get increasing numbers of Westminster MPs to question the government/MHRA position. Some Liberal Democrat colleagues of mine at Westminster including Norman Lamb MP, the social care minister, Dan Rogerson MP and Lorely Burt MP have been doing this as has Conservative MP Sarah Woolleston, who is a GP.
Along with Chris Davies, I will carry on trying to win over LibDem colleagues at Westminster, but this effort needs to be extended to Conservative and Labour MPs too. I would therefore repeat my previous call for concerned individuals to contact their MP to raise this issue (see previous blog: http://rebeccataylormep.blogspot.be/2013/10/e-cigarettes-and-tobacco-directive.html).
It would also be worth noting when you contact MPs that the MHRA is still (as of last week; Jeremy Mean spoke at the e-cigarettes summit in London http://e-cigarette-summit.com/) unable to give more than very vague answers to specific questions about how e-cigarettes could be regulated as medicines. This does not fill me with confidence…..
The battle for sensible regulation of e-cigs is not yet over and can still be won!

Posted in Blog | Comments Off on The Tobacco Directive & E-cigarettes: Trialogue update

E-cigarettes and tobacco directive: what’s next?

I am pleased to have played a role, along with my colleagues Chris Davies, Lib Dem MEP for the North West of England, and Belgian Liberal MEP Frédérique Ries in getting amendment 170 on e-cigarettes adopted by the European Parliament (EP) in the plenary vote on the tobacco products directive (TPD).

Posted in Blog | Comments Off on E-cigarettes and tobacco directive: what’s next?

The week before last, the EPP (centre right group) made a request to delay the vote on the tobacco products directive (TPD) until 8 October (it was scheduled for the September plenary session). This request was supported by the ALDE (Liberal) group and…

Worried about the overregulation of e-cigarettes and want to do something about it?

Following an agreement among the leaders of the European Parliament’s political groups last week, the final EP vote on the Tobacco Products Directive (TPD) has now been pushed back to the 8th of October 2013. Although the vote was not delayed because o…

Posted in Blog | Comments Off on Worried about the overregulation of e-cigarettes and want to do something about it?

Born in Putney, London in 1919, Brian’s political sentiments were first aroused against the Brownshirts and their targeting of Jewish immigrants in the East End of London in the 1930s. He joined the Bermondsey branch of the Communist Party in 1937, but was always more of an anti-fascist than a communist. He left the Communist Party in 1939 in disgust at the Hitler-Stalin pact.

As a student dentist at Guys Hospital in 1943, he met future wife Susan (née Goldschmidt), a student nurse. He then served in the British Army in the Middle East and married Susan in May 1946 after being demobbed.

In 1955 Brian saw the light and along with Susan joined the Liberal Party; both soon became dedicated party activists in their corner of South East London. Brian first stood for election to Bromley Council in 1956, was first elected in 1957 (allegedly the first Liberal Councillor in Kent), lost his seat in 1960, then regained it in 1962. During this period he was Health Committee Chair, elected by fellow councillors who thought a dentist well qualified for the role. He failed to get elected to the new London borough of Bromley Council in 1964, but was returned via a by-election in 1968. In the 1979 general election, Brian was the Liberal parliamentary candidate for the seat of Chislehurst (now Bromley and Chislehurst).

With their 12 year old son Michael pressed into service (helping “disappear” Tory stake boards into the boot of the family car), Brian and Susan worked their socks off to get a young man named Eric Lubbock elected to Parliament in the 1962 Orpington by-election. Over the years, Brian and Susan helped out with many by-elections including Sutton and Cheame in 1972, Bermondsey in 1983, Littleborough and Saddleworth in 1995 and of course Bromley and Chislehurst in 2006.

In their trusty caravan, Brian and Susan toured the country attending by-elections, Liberal party conferences, and helping the Liberal endeavours of son Michael in West Yorkshire, and daughter Wendy in Newcastle.

In 2007, when Brian and Susan received a long service award from the party, Liberal Democrat President Simon Hughes MP said that not only had they dedicated over 50 years to Liberal causes, but they had also created a Liberal Democrat dynasty with both children and grandchildren becoming party activists.

Brian never let advancing age stop his Liberal Democrat activism; when no longer able to deliver and canvass, he stuffed envelopes and sorted leaflets. He was also a dedicated federal conference participant, most recently at the 2013 Spring conference in Brighton.

Brian is survived by his wife Susan, three children, five grandchildren and one great-grandchild. 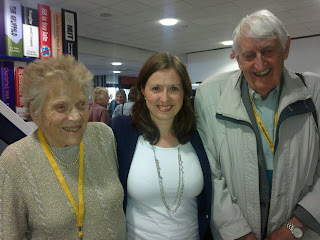 My support for the ‘Sandwich Protest’ against unfair internships in Brussels

Posted in Blog | Comments Off on My support for the ‘Sandwich Protest’ against unfair internships in Brussels
This site uses cookies: Find out more.