Mrs May and her Brexit crew are panicking

There have been suggestions from various sources including blogger JJ Patrick (see: tweet stream below) that Theresa’s May already plans to walk away from the negotiating table without an agreement with the European Union on Britain’s future dealings with the world’s biggest trading bloc and “blame EU intransigence”. 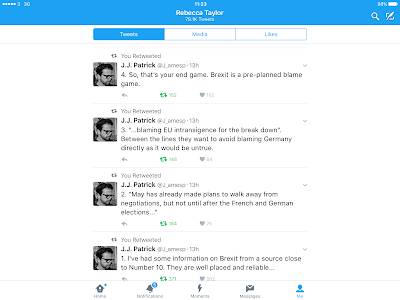 This means a cliff-edge Brexit i.e. WTO tariffs, no trade deals with any country in the world, which would according to the leaked Treasury report leave the UK with “less access to the EU single market than Afghanistan or Yemen”. Not a pretty picture and certainly not what Leave voters were promised.
So why on earth would a government inflict such an economic disaster in waiting on their own country? The answer seems to be “if they’ve realised they haven’t got a hope in hell of delivering the land of milk and honey they promised and think the only way out is to shift blame on to someone else”. The someone else of course being Theresa May’s favourite culprit for her failure, the European Union.
Mrs May has form on blaming the EU for her own failure as she did when she couldn’t achieve “net migration in the tens of thousands”. Although non EU migration (100% in her control as Home Secretary) was HIGHER than EU migration, she blamed “uncontrolled” EU free movement. The EU free movement, which had controls she chose NOT to use. 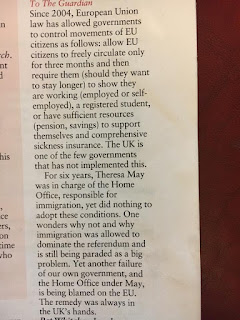 And then there’s the fact that the Brexiters should be at their happiest now, they’re in power, they’re polling well, the main “opposition” party isn’t opposing much, and has an ineffective leader, so why are they all so grumpy, angry and nervous? Because (as Nick Clegg puts it very well in the Evening Standard ), their Brexit #ProjectFantasy has just collided with #ProjectReality and they’re starting to panic.
Nothing else can really explain why Theresa May’s control-freakery has gone into overdrive. Not only does she not want Parliament to have any say (parliamentary sovereignty my foot!), but she wants to silence anyone who dare even question what she’s doing, never mind oppose it. Take her sacking of Lord Heseltine from his non-remunerated adviser roles (he's over 80 and was working 3-4 days a week for free!). The pro-European Tory grandee’s politely put and reasonable views wouldn’t have ended up plastered across national print and broadcast media so widely had he been ignored and not sacked.
In some of the numerous media interviews he undertook, Lord Heseltine also noted that many Tory MPs feel “appalled and betrayed by Theresa May’s handling of Brexit”. Another reason for nervousness, control freakery and undue haste. And that was before Nicola Sturgeon called a second independence referendum for Scotland.
Those of us who still believe Britain would be better off inside the European Union can perhaps take heart: this Tory Brexit government is nervous because they know they have to deliver the impossible to avoid public opinion and their media baron bosses turning against them. Pro-Europeans must hold our nerves because the war for the very soul of our dear country is not over yet.