My support for the ‘Sandwich Protest’ against unfair internships in Brussels 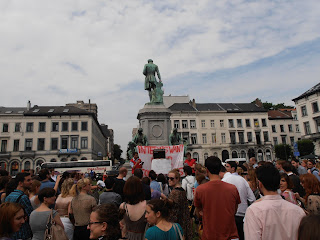 Hundreds of trainees working for organisations across descended on the sunny Place du Luxembourg last week to stage what has been dubbed the 'Sandwich Protest' - a demonstration to raise awareness of the poor working conditions and unfair remuneration of interns.
According to the organisers, a group called BXL Intern, the protest was so called because trainees in Brussels who do low paid or unpaid internships often cannot afford to pay for a proper lunch, and some have to sustain themselves by hunting down free sandwich buffets at conferences and other events.
The protestors' demands were far from unreasonable: a liveable wage, fair conditions, decent work, and an end to exploitation. The sad truth is that due to the current economic climate, many companies, NGOs and even top institutions based in Brussels are hiring interns to do the work of full time employees, paying them either very little or nothing at all, and offering no job stability or any kind of work guarantee for the future.
Although I was unable to attend the protest myself due to work commitments in the , I strongly support the demonstrators and all their demands. Internships should provide a valuable learning experience, which acts as transition between education and professional life. It is disgraceful that organisations are taking on extremely well qualified young people as interns to do full time roles as a purely cost-cutting measure.
Furthermore, unpaid internships simply must  end. Unpaid internships lead to social inequality, as those who are unable to financially support themselves inevitably lose out on these experiences or end up living precariously and running up debts.
The European Parliament's Youth Intergroup, of which I am a Vice President, is starting a campaign to introduce a set of internship quality standards and minimum level of pay for all interns working in the Parliament. Currently, only trainees taking part in the official Schuman scholarship training programme are guaranteed a salary (around 1200 EUR per month), whereas the payment of all other interns is at the discretion of the MEP or political group for whom they work. We have therefore launched an online survey which will hopefully give us a comprehensive insight into the working conditions and level of payment for interns across the political groups in the Parliament. We intend to use this information as a basis for our campaign.
I will be following the progress of this movement closely, and I am happy to support intern groups in anyway I can once Parliament reconvenes after the summer break.
Please note that (naturally) I pay my interns a living wage!