Posted on May 29, 2013 by Rebecca Taylor MEP
Today the European Parliament's Environment, Public Health and Food Safety Committee voted on the new EU regulation on clinical trials. The MEP responsible for the report is British Labour MEP Glenis Willmott.
The regulation will make it easier for clinical trials to be undertaken in Europe while protecting patients and ensuring greater transparency of clinical trial data.
There have been some misunderstandings on social media today concerning some of the amendments on transparency, leading some to believe that pharma companies were going to be able claim "commercial confidentiality" to avoid publishing clinical trial data. You will be glad to hear this is NOT the case : )
What actually happened was the following:
The ALDE (Liberal) Group voted against consolidated amendment 40 because we considered that consolidated 41 along with ITRE amendment 61 was a better way to achieve the same aims in relation to transparency. These two amendments would not have been adopted without the support of the Liberal group, including Liberal Democrat MEPs.
The ENVI committee final report on the clinical trials regulation will now go on to be voted by the Parliament as a whole (in plenary session). After that negotiations with national governments will begin.
Let's hope that the good result achieved in the ENVI committee today will be repeated in plenary and then agreed by national governments. Fingers crossed!
For the policy geeks among you (I am one, I admit!), here below is the text of consolidated amendment 41 and ITRE amendment 61: 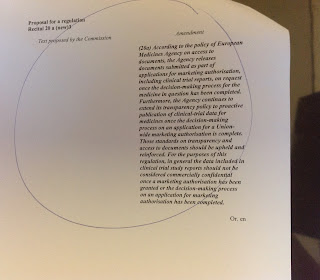