Croatia – the next country to join the EU?

Posted on September 5, 2012 by Rebecca Taylor MEP
This summer I has the pleasure to spend 10 lovely days in Croatia for my summer holidays. I visited Dubrovnik, the islands of Korcula, Hvar and Kolocep, and the city of Split.

Like thousands of people before me, I was blown away by the beauty of Dubrovnik ("the pearl of the Adriatic"), which has to be one of the most stunning cities in the world. I was also greatly impressed by Croatia's Adriatic coastline and islands with their pretty seaside towns, spotless beaches and clear sea. With the weather being in the mid 30s most of the time, a dip in the sea was a great way to cool down : ) 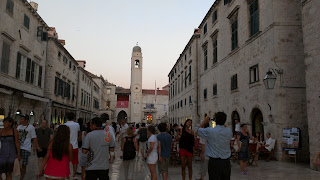 Dubrovnik's Stradum (main street) at sunset
I found good quality customer service, pretty good infrastructure (at least in the tourist areas), and buses and ferries that arrive and depart on time for which buying tickets was pretty easy. I also found Croats (those working in tourism and fellow holiday makers) to be friendly and at ease in foreign languages; virtually all Croats speak English and many speak German and Italian as well. Many were eager to find out if I was enjoying my holiday in Croatia (and happily I could honestly answer that I was!).

I got to enjoy Croatian food (lots of vegetables grilled in local olive oil for a vegetarian like me), excellent coffee, decent wine, and expertly made cocktails. I thoroughly appreciated the fact that virtually all hotels and cafes had free wifi for guests/customers (other countries please take note!). This allowed me to annoy friends who were not on holiday by posting pictures of lovely sunny beaches on facebook without paying hefty non EU data roaming charges : ) 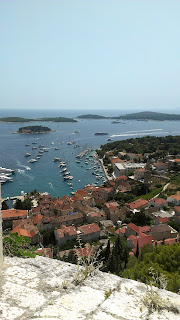 Looking down on Hvar Town
from the Spanish Fortress
On the subject of EU membership, views were mixed. On one hand, Croats feel a strong European identity and could see that joining the EU would have benefits for the country. However, they were concerned that as a small country within the EU, Croatia might not have enough influence to fight for its interests, and that changes required on the economic front could be detrimental to certain sectors of the economy.


Another point somewhat relating to EU membership, although not one any Croats mentioned to me directly, is the issue of the indictment and imprisonment of high ranking Croat
military personnel by the International Criminal Tribunal on former Yugoslavia (ICTY) in the
Hague.  Croatian cooperation with the ICTY to extradite those wanted by the Hague was
seen as a vital step towards EU membership.

Those tried, found guilty of war crimes and imprisoned by the ICTY include the Croat
Generals Ante Gotovina and Mladen Markac. Many Croats consider the imprisonment of
these Generals to be unjust, as the military campaign they were undertaking, named
"Operation Storm", led to the recapture of Croatian territory that had been seized by Serb
paramilitaries backed by the Belgrade regime of Slobodan Milosevic. The Generals are
considered to be national heroes for their role in Croatia's war of independence (often referred to as the "Homeland war").

The ICTY did not question the legitimacy of Operation Storm, but found the two Generals
guilty of war crimes including the forced deportation of around 90,000 Serb civilians and aiding and abetting the killing of several hundred as part of a deliberate policy to rid the region of its Serb population. A third Croat soldier Colonel General Ivan Cermak was acquitted. There were protests in Croatia at the time of the verdicts.

During my stay in Croatia, I saw many posters featuring the photo of a man in military
uniform and thought that they might be election posters of a candidate. Upon asking a
shopkeeper in Dubrovnik whose window displayed one of these posters, I found out that the man on the posters was General Gotovina.

Reminders of the war are everywhere despite massive reconstruction. On Kolocep, a small
island near Dubrovnik, one former hotel was so badly shelled that it was not worth repairing. As no-one had come forward to demolish it and/or rebuild something else, it remains as it
was (with appropriate safety measures taken of course). 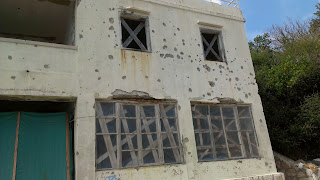 War damaged former hotel in Kolocep
In Dubrovnik, I went to the War Photo exhibition, which was very moving. It was particularly
striking to see photos of a deserted Dubrovnik in the midst of being shelled with buildings on fire, then to walk outside and find oneself in a thriving elegant city packed with tourists.

Croatia is due to join the EU in 2013 and there are now Croatian observers in the European Parliament including one in the ALDE group, Mr Jozo Rados an MP from the Croatian Liberal Democrat party. Upon learning that I was an MEP, many Croats asked if I knew for sure whether Croatia would join the EU in 2013. I had to answer that I was not personally involved and had no special knowledge, but that I had not heard anything to the contrary.

Croatia is a beautiful country with hospitable people and great weather and I would strongly recommend a holiday there. I also hope to be welcoming Croatia into the EU fold in 2013. 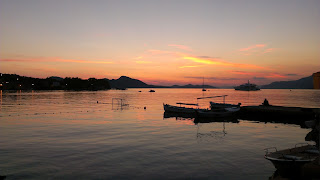 
This entry was posted in Blog. Bookmark the permalink.