The Olympic flame passes through Yorkshire

Posted on June 25, 2012 by Rebecca Taylor MEP
This week, the Olympic flame was carried by various Torch Bearers through many parts of Yorkshire, on its long journey to London where the 2012 Games will begin.

Over the last few days, the flame has made its way across the border from Greater Manchester to pass through Huddersfield, Halifax, Bradford, Keighley, Skipton, Burley in Wharfdale and Headingley among other places, before arriving in Temple Newsom park in Leeds on Sunday evening where it was greeted by 40,000 people.

Early this morning (at about 07.15), the flame began its journey from Leeds to Sheffield, starting at the Town Hall. I was lucky that the route it took passed very close to where I live.

I got up and dressed early and took my cup of tea with me to the end of the road, where many other people were gathered waiting for Torch Bearer 005 to run past. Some local residents were still wearing pyjamas!

Here is the Olympic flame going past the end of Dock Street in Leeds. The Torch Bearer is I believe Mr Tony King from Bradford (cannot verify 100% I'm afraid as his profile doesn't have a photo on it, but age, gender & route stage seem to match). 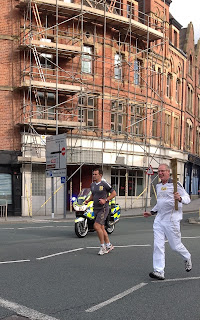 As you can see, the good folks of Leeds and this morning's Torch Bearers were quite lucky with the weather; there wasn't a drop of rain to be found : )