Posted on March 16, 2012 by Rebecca Taylor MEP
Most people probably do not realise that becoming an MEP following a resignation is not instantaneous. There are a few administrative hurdles to be overcome first. And for the Eurosceptics out there thinking "EU bureaucracy" I would hasten to add that almost all of these hurdles are on the UK side of the channel not the Belgian side : )

I have thus spent some time during the last 2 months explaining on the 'phone or via e-mail that I was not yet an MEP and (until Friday 2nd March) was still actually working in a full-time job unrelated to the European Parliament/the Liberal Democrats (a big thank-you to my former employer hanover for their understanding during this time).

However, the becoming-an-MEP process is almost finished now. Yesterday I filled in and signed a variety of forms at the European Parliament in Brussels* and received my MEP ID badge. On Wednesday 28 March, I am due to be officially sworn in. 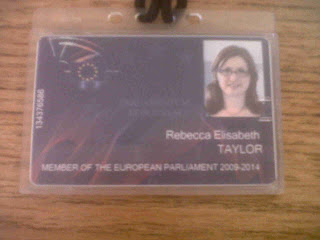 * The eagle-eyed among you may note that this week was in fact a Strasbourg plenary week for the European Parliament; I was not able to attend this plenary due to not officially being an MEP yet.