Rebecca Taylor, Lib Dem MEP for Yorkshire and the Humber, has met with a shopkeeper who contacted her and other MEPs to ask them to push for e-cigarettes to be regulated as consumer products not medicines. Retailer Matt Gluggles, who runs Topjuice Retail in York, wrote to Yorkshire MEPs including Rebecca.

The campaign to keep e-cigs regulated sensibly and thus more freely available scored an important victory 2 weeks ago when the European Parliament voted against medicines regulation.

“This has been democracy in action with people writing to their MEP and seeing a change in policy on e-cigs. Rebecca Taylor MEP and Chris Davies MEP (both Lib Dem) put forward the amendment after consulting with experts on the issue, and listening to the views of people who actually use e-cigs. Their amendment gained the majority to save e-cigs.”

“It has been good to meet both e-cig users and retailers to see for myself the impact of the work I and other Liberal colleagues have undertaken to get the Parliament to change its view on ecigs. As Matt said, this really was a real case of democracy in action, as what spurred MEPs from different European countries to change their mind on this issue was being contacted by many ordinary people.”

Rebecca Taylor with Matt Gluggles at Topjuice Retail, in York. 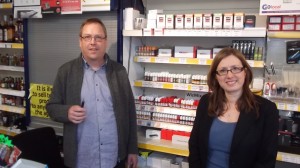 This entry was posted in Media Releases. Bookmark the permalink.